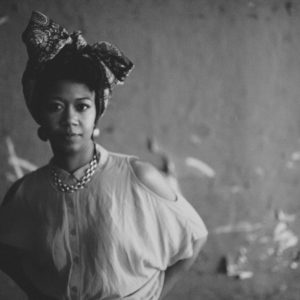 “I take a deep breath and step out on faith. Do it afraid.” Those words have been a mantra for South Side of Chicago Native, Sharon Irving, songstress/songwriter/ poet, voice over artist, worship leader and actress, since she was a little girl, performing in front of the congregation at the south side church in Chicago where her grandfather was pastor. Her first steps as an artist were shaped by the influences of his powerful baritone singing and eloquent sermons, and the mind blowing artistry of her father, famed jazz musician and composer, Robert Irving III. With loving encouragement from her mother and grandmother, Sharon has cultivated and shaped her own creative persona. She is an inspiring ‘voice for the voiceless’, a passionate wordsmith spewing truth and inspiration, singing songs of life and love motivated by her personal experiences, and undergirded by her Christian beliefs. Sharon has been a part of the worship team at Willow Creek Community Church in Barrington, Illinois for several years, has contributed songs and words of hope before thousands at liturgical and corporate events, youth conferences, including the popular “CHIC”, (‘Covenant High in Christ’), in small clubs and intimate settings all over the country, at the Angola Prison in Angola, Louisiana, and even entertained millions while a participant on Season Ten of “America’s Got Talent”, where she received the coveted “Golden Buzzer” at her first televised audition, and was chosen by America to compete in the Semi-Finals. “We are all walking art”, Sharon has stated as she fuses her love of fashion and music into a whimsical symmetry of sound and visual esthetic. Sharon poured her spirit into her debut album, ‘Bennett Ave’. “I like to blend different art forms when I’m writing songs and, with this album, I’ve drawn inspiration from every genre and I mean every genre. I have a passion for shaping words and everyday phrases to melody. ‘Bennett Ave’ is an expression of my thoughts on issues of justice, love and redemption in the darkest situations. It’s about what it means to be human when we’re at our lowest and highest points. It’s been challenging, but my heart is to pursue new methodologies in worship music, and reach people through mainstream music. Life is messy and broken. So many people are hiding, living for others, dying on the inside, holding onto unhealthy narratives out of fear but Gods strength is made perfect in those messy places. I’m learning this, daily. There’s an unlikely and beautiful story of redemption waiting to unfold in our lives. I’ll never forget when someone said that God called me to be a “shifter and changer of atmospheres”. I truly believe worship changes atmospheres. I want my worship and art to be transparent, transformative, raw, uplifting and healing.”

Back to All Artists