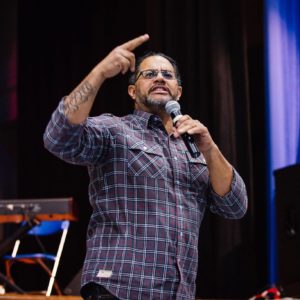 Phil and his bride Kim have been married since the summer of 1985. They have three fantastic grown kids, 7 grand kids and have lived in Chicago since 1993. For more than three decades, Phil has served God full-time on the front lines of urban youth ministry interrupting violence in the life of youth and young adults one relationship at a time.

“Phil is one of the most superbly gifted youth ministers I have ever met. He combines a keen appreciation for Christian ministry with an incredible knowledge of youth culture. Phil is able to reach youth because he understands where they live and how they think, but most important, how they navigate the perilous terrain of urban life. I know of no one who is more qualified to reach, teach and preach to youth and the often-bewildered parents who don’t have a clue about their children’s worlds. Phil is the bomb: he’s as explosive as a hand-grenade and he packs a powerful punch for the cause of Christ.”